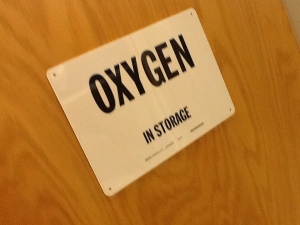 I did something that I have never been able to do before: I meditated for thirty whole minutes. I sat on a chair in my office, feet planted, hands in my lap, back straight, eyes closed and just focused on my breathing. Good air in, bad air out; repeat. There is something quite nifty about breathing. It turns out that it’s important. For living and such. I know that I have pretty much been breathing all of my life but after focusing on it for thirty minutes and actually noticing my belly move as air sucked in, then feeling the warm air run back out through my nose, I can’t help but wonder if I have been holding my breath more often than just during temper tantrums or when trying to get rid of the hiccups.

My doctor suggested meditation to me. I had gone in to see her because I hurt my back and literally could not stand up straight. “I think I have M.S. or possibly Polio” I told her as I hobbled onto the exam table “and I absolutely do not have time for either one. I need some kind of emergency pill ASAP. I have an out of town convention next week and I have to play GOLF one of those days and golf is hard enough for me when my back DOESN’T hurt and I have fourteen heavy boxes of samples that I need to load into my car and my house is filthy and the laundry has piled up, and my work lap top crashed two days ago and I have three hundred and forty two emails to return but I can’t even sit at my desk without pain, not that I CAN RETURN THEM ANYWAY because as I mentioned my LAPTOP HAS CRASHED and corporate hasn’t fixed it yet and my iPad and iPhone have been acting funny ever since that stupid ISO update, I suggest that you DO NOT DO THAT UPDATE IF YOU HAVE an iDevice, though I think somehow our internet provider is to blame for some of this and I mostly am annoyed with everyone, even my children and husband who mostly don’t deserve my annoyance, but the people who work at the internet company, THEY DO, just saying, and these mid-forties hormones are KILLING ME and NO ONE SEEMS TO UNDERSTAND THAT MY LIFE IS CLOSING IN ON ME LIKE A STAMPEDE OF MAD-COW-DISEASED COWS except I don’t think that cows with mad cow disease are capable of stampeding, they would be more floppy and drooly, plus that just sounds funny when you say it outloud, so let’s call it a PACK OF RABID HYENAS and I think ANYONE would have panic attacks, even the calmest coolest of people, if they had a pack of rabid hyenas chasing them. Don’t YOU think? DO YOU SEE? I AM GOING CRAZY and NOW, as if crazy isn’t bad enough, I have POLIO! I used to be such a GOOD person and I KNOW I should be grateful for my life and that I should be writing my gratitudes down every day like ‘they’ say I should, but I say F gratitudes! I’m TIRED and my back hurts and I don’t FEEL grateful right now.”

At my pause for a breath, my doctor, she is actually a nurse practitioner, and a healer, gave a sing song giggle (on account of the F-Bomb) smiled and then gently hugged me and soothingly said “You are not crazy. You simply have a lot going on in your life and your back pain is not helping you any. Have you ever thought maybe that you don’t have to do it all, all the time?” And then she talked about how stress can lower immunity and leave you more susceptible to injury, which can be your body’s way of saying “Slow the hell down for a minute or two!’. She said we would first figure out how to help my physical pain and then work on some tactics for taming the rabid hyenas. Meditation was one of the tactics she suggested.

I have always believed the best place to be is right in the moment, in the now, where we are best connected to ourselves and our God, but I have never been very good at being there. There’s always so damn much to DO that it’s easy to just plow through the now, ignoring its potential. But my unexpected vomit of hysterical honesty on the exam table made me realize it was time to try and settle down some, for the sake of humanity, or at least for the sake of the people in the path of my panic attacks, including my very own self.

I got through my convention week with the help of muscle relaxers and just chipping and putting on the golf course (it was a scramble). Each night, after the evening’s festivities, I did some reading on meditation and started with just trying to make sure I was actually breathing which was questionable by the third evening. Tired, hungry and over-socialized, the panic hit me so hard it felt like I could not exhale. My lovely girlfriend asked “do I need to bring you some carbs and a puppy?” and my husband softly said “why don’t you take a hot bath and calm yourself and then decide what you want to do tonight” and I suddenly realized I could opt out of socializing that night, that the world would not end if I took a bath and went to bed instead of going to the grand finale party. It had never occurred to me that I didn’t always have to push through my exhaustion and do what I thought was expected of me by others. After my bath, I focused on breathing, in and out, until I fell asleep, at 7:45 pm.

And no one really cared.

And the world kept spinning.

And I woke up rested and ready to start listening to my mind and body.

Enter Saturday, my usual day of getting all the shit done around the house that didn’t get done all week and I could feel myself clenching up and watched my family members all walk by me hesitantly. It was a yucky feeling to realize they were all preparing for the regular Saturday H Tornado. So I decided that I would give meditation a real chance before I did anything else. I sat down in the chair with an open mind and no expectations except to just focus on my breath. I set the timer so I would not glance at the clock every thirty seconds.

Someone knocked at the door once but I ignored whomever it was, staying still instead of screeching “I’M TRYING TO MEDITATE YOU JERKFACE!’. At least they knocked right?

A few of the children were loudly carrying on upstairs, making obnoxious thumping noises and clearly not doing their chores. But this did not disturb me, too much.

My mind chattered with all kinds of thoughts: would I be able to resist that bag of Doritos (I didn’t if you must know) and why on earth was I selling carpet for a living when I was clearly meant to be a meditation Guru (this was euphoria from all the breathing). A few thoughts put a sick feeling in my stomach, thoughts that started with “have to”, “should have” or “wish I wouldn’t have” and I simply noticed what those thoughts did to my body and it was okay. They are my thoughts and they don’t need to go away. I just need to learn to not be harmed by them. I breathed in and acknowledged them and breathed out. I didn’t expect to instantly quiet 47 years of monkey mind in the first real sit down with myself.

But when the timer went off, I was shocked how fast the thirty minutes had gone and that I had been still the entire time. I felt as though I had gone for a run AND taken a power nap at the same time.

When I returned to the chaos that is my life, things somehow seemed less chaotic and more humorous. The house didn’t seem as dirty. My second born asked if I would proof a paper for him and I felt interested instead of annoyed by “one more thing I had to do”. (The paper was spectacular by the way. He is a very good writer.)  Even my back felt a little better. I was able to pinpoint a few things around the house that I wanted to do, and did them without frenzy and let the rest go for another day.  And for the first time in a long while it felt like a few of the hyenas had been given rabies shots and fat steaks.

So there is THAT. For NOW:)

View all posts by peaceof8