No amount of natural family planning education could have prepared me for the conversations about sex that I have had with and about our dogs Cooper, a big, beautiful un-neutered 2 year-old yellow lab and Bella our 1 year old Chesapeake Bay Retriever, who started her first period five days ago. Even if we HAD been paying attention and not giggling during most of the six week long NFP course we enrolled ourselves in over 20 years ago when I decided to throw away the pill after the two oldest boys were born and be free spirited and open to whatever and whoever came our way. Grant willingly went along for the ride which resulted in four more kids.

The instructor was LOVELY and very knowledgeable but everyone in the class was so dang serious, taking notes and nodding their heads. Meanwhile in the back of the class Grant and I were giggling and drawing pictures of penises and making gagging noises every time the instructor talked about the consistency of the deposits left on the woman’s undies when she was ripe for the picking. Who KNEW that was a thing? And though I will admit that by number five pregnancy I did say to myself a few times that perhaps we should have paid attention a bit more, David was my most mellow and happy baby, so I was rewarded more than I was harmed by my inattention. And we DID learn enough to only get six instead of twelve kids. So I’m happy we took the classes but also glad we were not super rigid on the “rules” or we’d not have had near as much fun during the chaos. Nor would we have these six amazing people in our lives.  The truth is I never felt like my people where all here until our youngest arrived fourteen years ago. And then I just knew that was that. And it was. Even though we continued with our free spirited approach.

BUT I am really struggling with the dogs and the subject of sex and teenage dog pregnancy.

Now mind you, I have had many conversations with my kids about sex. I think we’ve been relatively open about the subject without being over the top. It’s my and Grant’s job to try and steer them to live their best lives by making good choices for themselves and for others. My standard line is “Sex always complicates things, so you’d best be certain your relationship is strong before you go down that path.” That is really the only true advice I can offer my kids about sex, to be sure you are in a good relationship before complicating things. And I feel like my kids are going to do their best to be mindful about a very personal subject.

But the dogs? I’m not completely certain they are listening to any advice I’m giving them.

Now. Before you judge you need to know that we have ALWAYS spayed and neutered our pets in the past which I GUESS it’s the right thing to do. Though sometimes I wonder what the animals think about us controlling their lives so much. If someone forced ME to get spayed, how would I feel? I’d rebel of course. It would be Planet of the Apes all over again. Only super different.

But with Cooper and Bella things kind of just snuck up on us. Cooper is technically our oldest son’s dog (which is a whole different story). But we all agreed that we would wait until he was full size before we discussed taking his balls from him because of the research we did about neutering dogs too soon. But now, here he is two years old, with GIANT balls that seem wrong to take. And the boy/men in the household, who love Cooper almost as much as I do, adamantly believe with deep, full body shudders, that he should keep his balls.

When Bella came into our lives at about 12 weeks old, I was in this place where I felt like I could take on anything, including Chesador puppies. We had agreed to wait until after her first cycle to get her spayed (that full growth thing again) but I had that deep down longing to just let nature take over. My life has gone quite well with that approach (save for the whole bank account thing). Besides, why should it be the girl dog who has to be the one to go through the pain of getting spayed? Girl dogs are people too!

I felt great about this idea until Bella got her period. And then holy hell. She is currently a moody messy pile of stinky insecurity. It didn’t help her self esteem a whole lot when we put her in these flowery Velcro dog panties with a hole for her tail. “CuteBone Dog Diapers”.  She doesn’t know this, but she is soon going to be the spokes-dog for these diapers. I submitted a 5 star review complete with pictures of her to Amazon Prime, so I’m sure we’ll be getting the six figure contract any day now. Or at least some free dog food.

Cooper and I have talked a lot about how sex complicates things and that Bella is much too young to be a mother and he just looks at me with those beautiful, serious brown eyes and wags his tail in agreement, so I mostly feel like everything will be fine. He’s a good dog, with morals and convictions. And he has professed his deep love for Bella so I feel certain he will wait until they are both sure it’s the right time. It’s clear how much he loves her.

He also told me that he LOVES puppies and would be a stay at home dad if Bella wanted to be a working dog mom. Do you see how great he is? Just look at that innocent face (he is sitting on our dining room table in this picture): 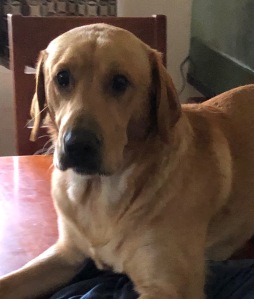 But Bella? I’m pretty sure she’s a total slut. The boy dogs ALWAYS seem to get blamed, but seeing the way she is starting to act as she gets closer and closer to prime puppy making time I feel like the boy dogs might be getting an unfair tail shake. Consequently, when we leave the house, she is the one who gets locked in the bathroom for safe keeping. I know it’s terrible to talk about her this way. She’s normally so cute and funny and smart. But right now, she’s completely lost her mind. Here she is looking like a circus monkey, sulking about her diaper on the couch:

Yesterday, when I was doing yoga in my daughter’s old room (now dubbed the yoga room) I forgot that no one else was home when I shut the door. The dogs always want to be on my matt and interfere with my awkward chubby girl stretching so it was habit to close them out. Five minutes later, a loud banging started up against the yoga room door and I pulled out of my downward facing dog pose super fast, hobbling to the door with a now tweaked back and yanked the door open only to find both dogs right outside the door looking very guilty. Bella’s diaper was pretty much in tact and  it turns out that they were fighting over a tennis ball but I still yelled at them, my chillaxed attitude about sex and mother nature and making good choices pretty much out the window: “YOU MAY NOT HAVE MORE SEX THAN I DO! THIS IS MY HOUSE TO HAVE SEX IN NOT YOURS.” I swear Cooper nodded his head in serious agreement, but Bella? She just smiled her stinker face dog smile and said “Why don’t you just close that door again woman and get back to your chubby yoga and we’ll just see about your silly human rules.”

View all posts by peaceof8